Christians Around the World Welcome Three Wise Men for Epiphany

Christians around the world marked the holiday of Epiphany on Friday with parades, toy distributions, and local water traditions — a way of welcoming the Magi to Bethlehem following their journey to visit the baby Jesus.

The holiday is often referred to as Three Kings Day as most Christian traditions list three Magi – Gaspar, Balthazar, and Melchior – visiting the baby. The Gospels do not explicitly state only three Magi approached the manger following Jesus’s birth, however, or that they were, in a political sense, kings ruling over any particular territory. Orthodox churches also associate the holiday instead with the revelation that Jesus is the son of God, or of his baptism.

At the Vatican, the Catholic Church observed the traditional arrival of the Magi with gifts, presented to the large nativity display in the heart of St. Peter’s Square.

The Kings have arrived at the #Vatican crib. Happy #Epiphany pic.twitter.com/WA5sbaoXzE

Pope Francis offered a homily urging the faithful to “fall down and entrust ourselves to God in the wonder of worship,” just as the legendary kings traveled from what many believe to be modern Iran to Bethlehem, following a star they believed would lead them to their lord.

“Let us worship God, not ourselves; let us worship God and not the false idols that seduce by the allure of prestige and power … let us love God and not bow down before passing things and evil thoughts, seductive yet hollow and empty,” Pope Francis said.

“Benedict XVI said of the Magi: ‘Their outward pilgrimage was the expression of their inward journey, the inner pilgrimage of their hearts,’” he recalled.

Outside of the Vatican, Epiphany is a day of effusive revelry for many Christians. In much of the Spanish-speaking world, Epiphany is more commonly referred to as “Three Kings Day” and marks the arrival of the Magi to Jesus’s manger, carrying the gifts of gold, frankincense, and myrrh. Many Christians choose to distribute gifts to children on January 6 instead of Christmas in honor of the gifts to the baby Jesus.

Madrid, Spain, is home to one of the world’s largest, brightest Epiphany parades, known in Spanish as the “Cavalcade of the Kings.” After two years of subdue celebrations as a result of the Chinese coronavirus pandemic, the 2023 Cavalcade featured large crowds of children gathered to observe elaborately lit parade floats and welcome the Magi to the capital. Estimates suggest thousands of families crowded the streets of Madrid to greet the Three Wise Men. The parade was held on Thursday night.

Similar Cavalcades were held throughout Spain. In the town of Logroño, Balthazar, Melchior, and Gaspar made a dramatic entrance via helicopter to great applause.

In Mexico, the tradition of giving presents to children and the consumption of what is known in English as the “king cake,” a tradition shared with France and parts of Louisiana, predominates. The Mexican television broadcaster TV Azteca claims to organize the world’s largest toy distribution event for the occasion, the Jugueton, using (clean) garbage trucks to distribute toys nationwide.

The tradition of gift-giving for children is so strong in Mexico that drug cartels have, in past year, coopted it, using their proceeds to organize parties and distribute presents to children in the communities in which they operate.

The Orthodox churches that celebrate Epiphany tend to focus less on gifts for children – and not particularly on the Magi – and more on traditions involving water. Greek Orthodox Christians have maintained the tradition throughout the country of tossing a cross into local bodies of water, then having young men dive to find it. The man who pulls the cross out of the water is said to be especially blessed by God for the year.

This year marked the first since the pandemic that Greeks were allowed to celebrate Epiphany dives without coronavirus restrictions. Greeks celebrated in past years, anyway, however – in 2021, the government relented and opened churches after mass defiance of civil liberty restrictions. According to the newspaper Kathimerini, warm weather for January also aided in bringing out crowds for the celebrations.

Kathimerini noted that the tradition of diving for a cross is so popular in the port of Piraeus that “a cross is traditionally thrown three times, to accommodate the throngs of swimmers.”

The Greek newspaper Ta Nea highlighted the winner of the dive this year in the town of Halkidiki, 20-year-old Giorgos Soulis, who dedicated his participation in the tradition to past participant Giannis Damianos. Damianos, 24, participated in the 2021 event in honor of his cancer-stricken brother, but suffered a severe neck injury that left him temporarily in a coma and ultimately wheelchair-bound.

A version of the cross tradition was also held on Friday in Kalofer, Bulgaria, where throngs of men playing bagpipes jumped into the Tundzha River to perform traditional dances in addition to retrieving the cross. 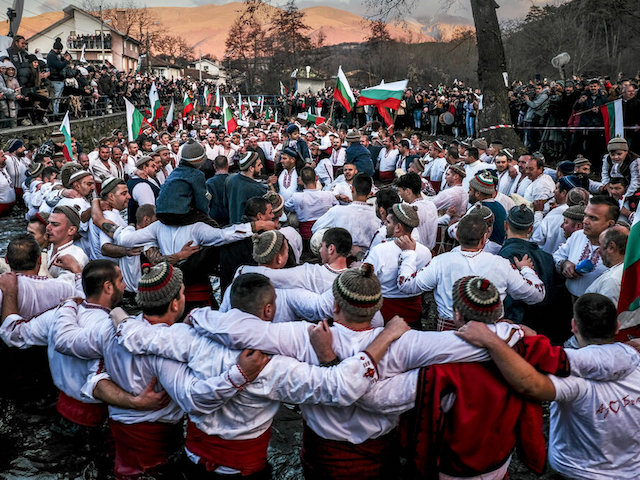 Men link arms as the dance in the cold Tundzha River to celebrate Epiphany in the town of Kalofer, Friday, Jan. 6, 2023. (AP Photo/Alexander Nikolov)

In Pietrosani, Romania, locals celebrate Epiphany with a horse race featuring elaborate outfits for the steeds and large throngs cheering on the racers. Priests bless the horses with holy water before they run. 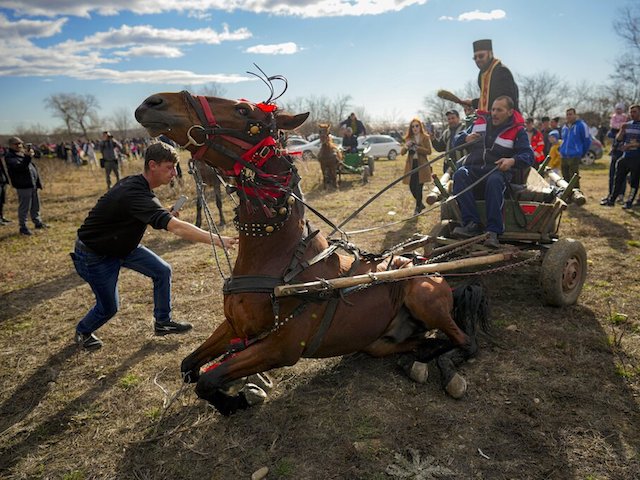 A horse pulling the cart in which a priest rides falls after being startled by noise during Epiphany celebrations in the village of Pietrosani, Romania, Friday, Jan. 6, 2023. According to the local Epiphany traditions, following a religious service, villagers have their horses blessed with holy water then compete in a race. (AP Photo/Vadim Ghirda) 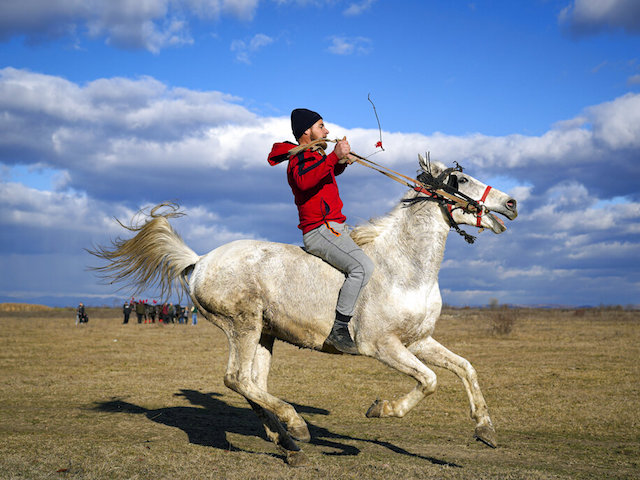 A man rides a horse during Epiphany celebrations in the village of Pietrosani, Romania, Friday, Jan. 6, 2023. According to the local Epiphany traditions, following a religious service, villagers have their horses blessed with holy water and then compete in a race. (AP Photo/Vadim Ghirda)

Video: Finland Debuts National Transgender Ice Skater, And It Went About As Expected

Nobody Told Me We’re at War – NATO State’s President

Pope Francis Decries ‘Spiral of Death’ Between Jews and Palestinians

Russia: 14 killed in ‘deliberate’ attack on hospital in Ukraine