Riley Keough was seen cradling her baby daughter as she returned to Los Angeles with her husband Ben Smith-Petersen, after flying to Memphis to attend a memorial service for her late mother Lisa Marie Presley.

The actress, 33, donned a long beige coat as she carried her daughter out of the plane, after revealing during her eulogy that she had secretly given birth to the child.

Keough, the daughter of the late Lisa Marie and Danny Keough, was seen carrying her baby daughter as she exited the plane after the lengthy flight back.

Back home! Riley Keough was seen cradling her baby daughter as she returned to Los Angeles, after flying to Memphis to attend a memorial service for her late mother Lisa Marie Presley

Smith-Petersen was seen sporting a long-sleeved grey top with a backpack, lead gray jeans and black shoes as he was seen deboarding the aircraft at Van Nuys Airport.

The Australia-born stuntman carried a large bag and a fold-up baby seat as he was seen getting off the plane.

The family was seen a day after Riley was apparently so overcome with emotion she could not speak at her mother’s memorial service on Sunday.

Keough instead had her husband read her eulogy for her — revealing Lisa Marie became a grandmother shortly before she died earlier this month. 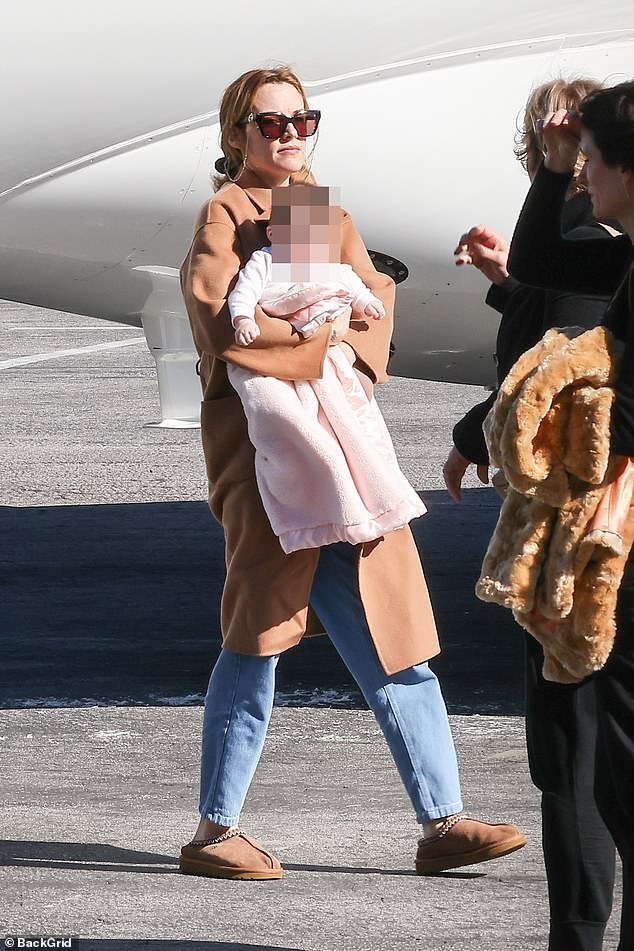 Casual: The actress donned a long beige coat as she carried her daughter out of the plane, after revealing during her eulogy that she had secretly given birth to the child 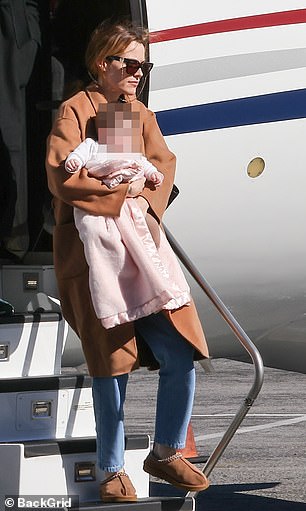 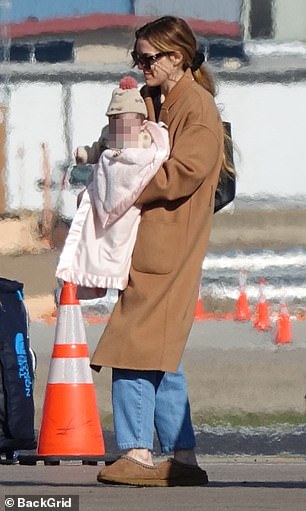 Family: Keough, the daughter of the late Lisa Marie and Danny Keough, was seen carrying her baby daughter as she exited the plane after the lengthy flight back 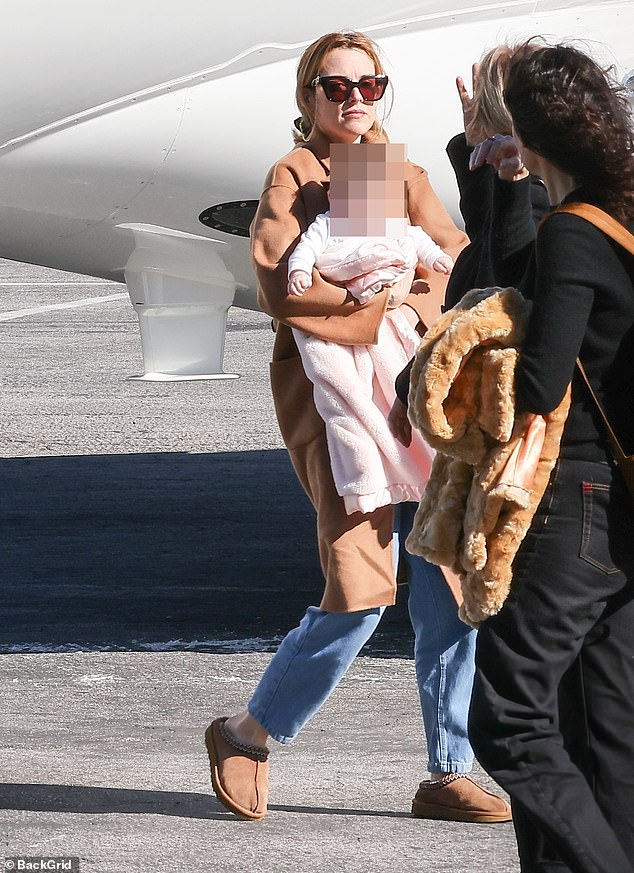 Cosy: Riley donned comfy brown suede slippers as she exited the private plane with her family after attending Lisa-Marie’s memorial over the weekend 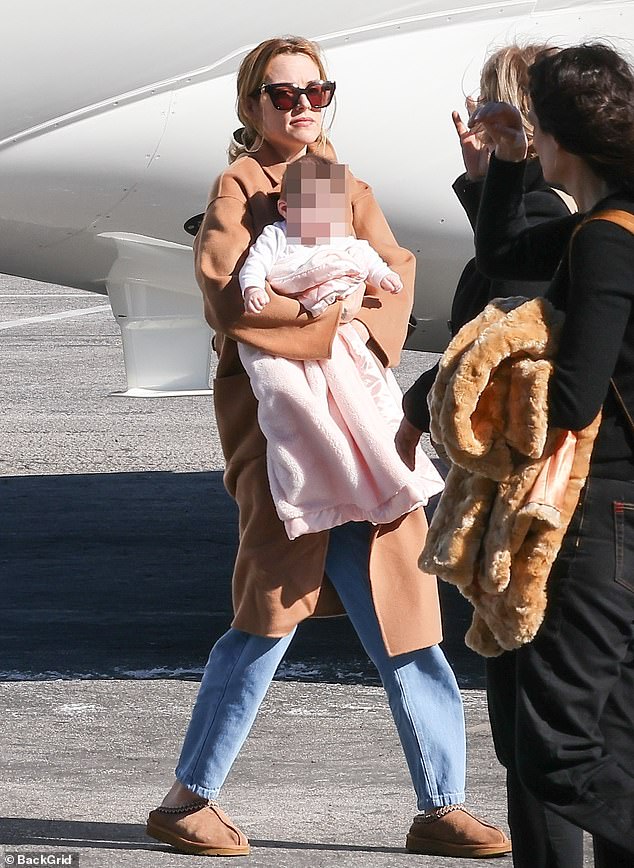 Tough time: The family was seen a day after Riley was apparently so overcome with emotion she could not speak at her mother’s memorial service on Sunday 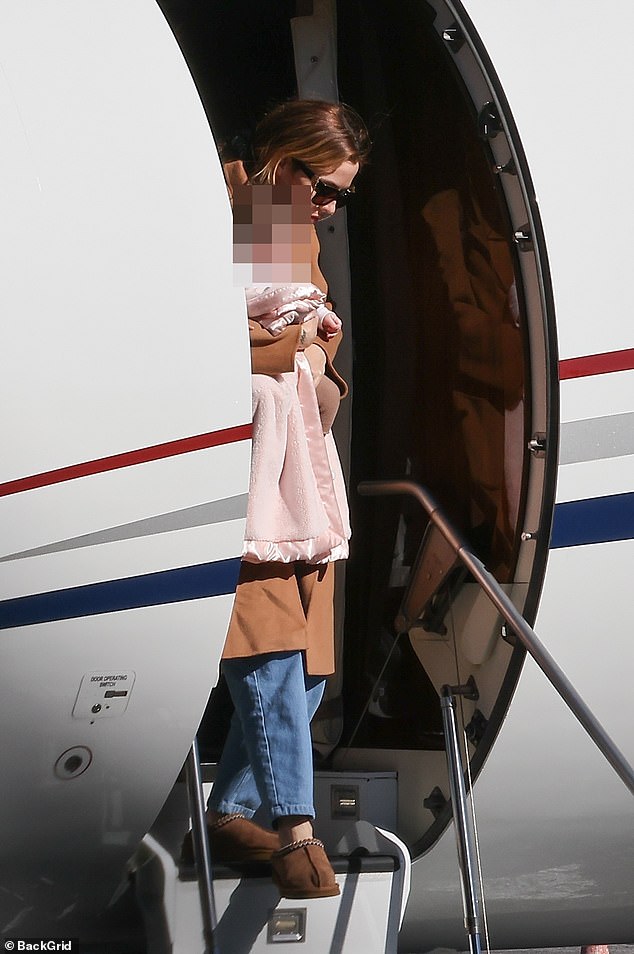 News: Her husband read her eulogy on her behalf, in which she had revealed she had recently welcomed a baby girl 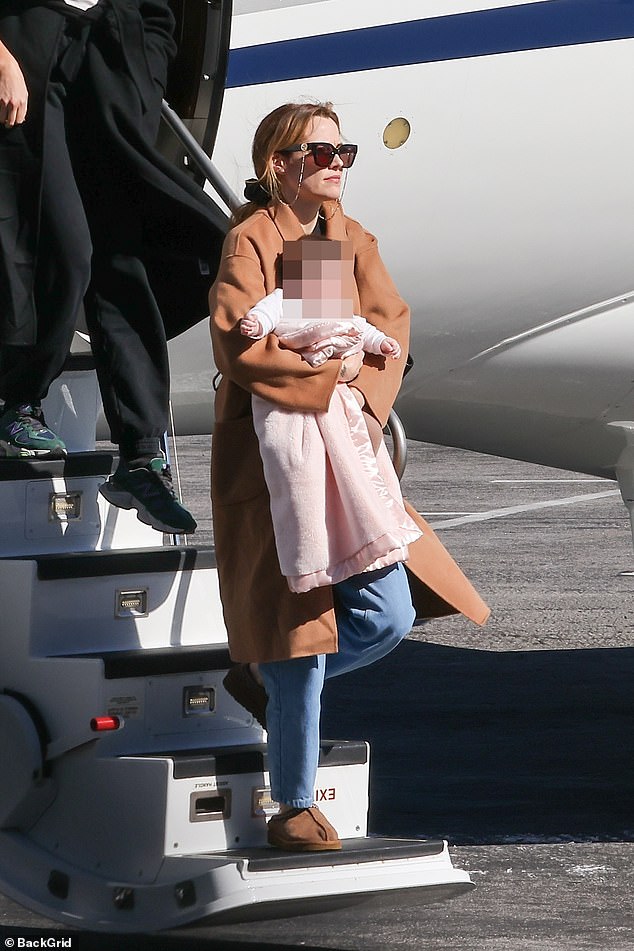 Riley then went on in her speech to thank her mother for everything she had done for her, her half-sisters and her late brother, Benjamin, after her grandmother, Priscilla read a similar poem by one of Lisa Marie’s 14-year-old twins.

Lisa Marie, 54, would be buried just moments later next to her father, rock icon Elvis, and her son, Benjamin. 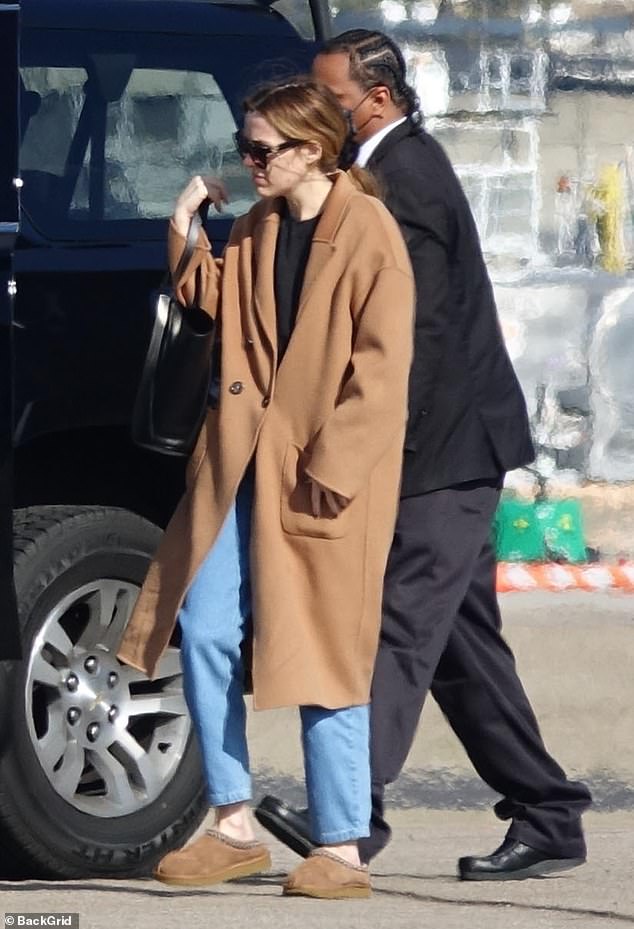 Supportive: Riley then went on in her speech to thank her mother for everything she had done for her 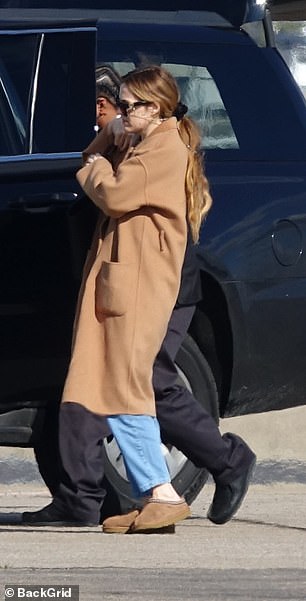 Simple: Riley cut a casual figure as she exited the jet with her family, after joining a slew of stars in attendance for the memorial 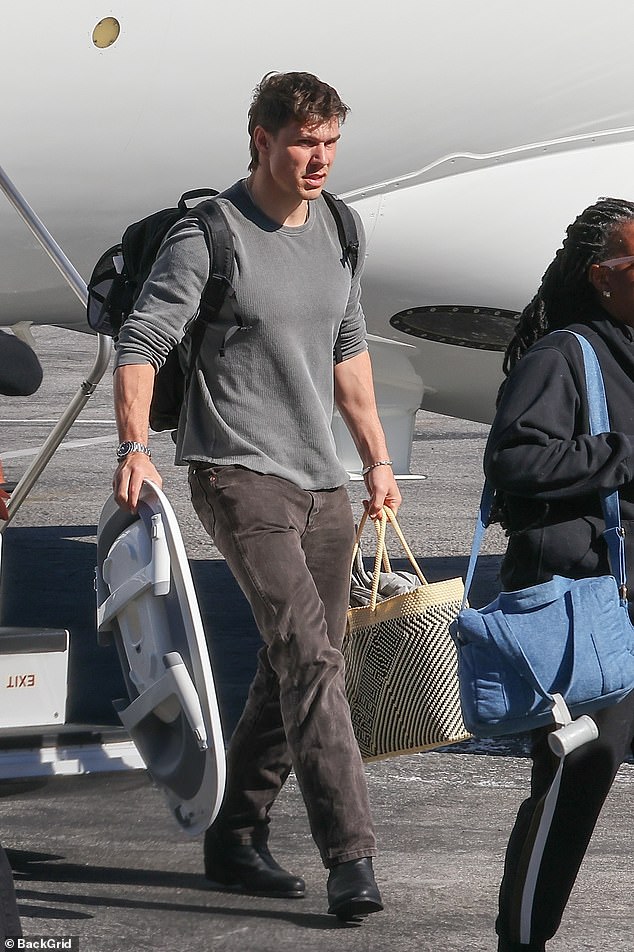 Touching down: Smith-Petersen was clad in a long-sleeved grey top with a backpack, lead gray jeans and black shoes as he was seen deboarding the aircraft at Van Nuys Airport 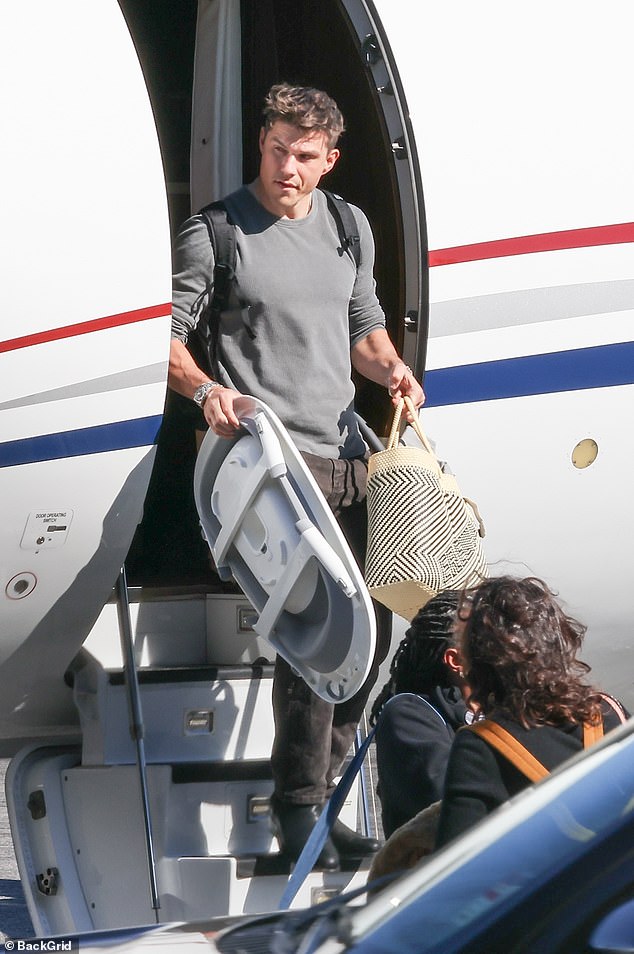 Out and about: The Australia-born stuntman carried a large bag and a fold-up baby seat as he was seen getting off the plane

Riley was pictured arriving at the memorial for her mother on Saturday dressed down in sweatpants with her hair loose as she carried a baby.

Her newfound motherhood apparently had an affect on her remarks, as she shared memories she had of her mother at the memorial service on Sunday.

‘I remember you driving me in my car seat playing Aretha Franklin,’ she shared in the eulogy. ‘I remember the feeling I’d get when you picked me up from school.’

Priscilla Presley said in a tweet Monday, ‘Thank you all for your condolences, you have touched me with your words. It has been a very difficult time but just knowing your love is out there makes a difference’ 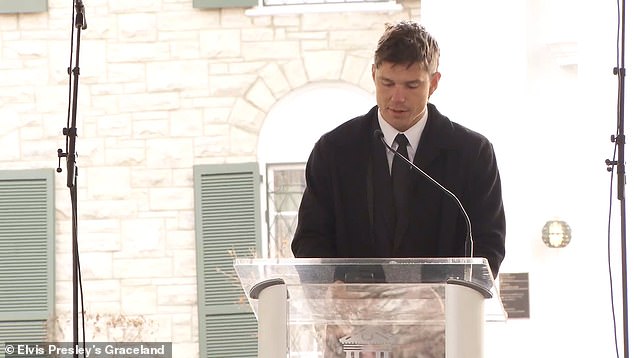 Difficult: Ben Smith-Petersen read his wife Riley’s eulogy for her mother at the service 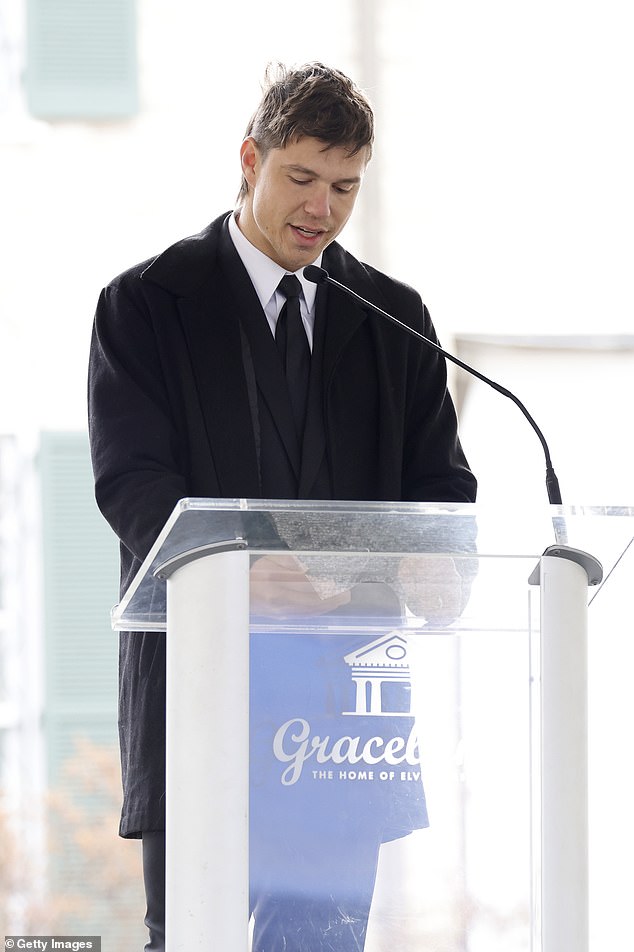 ‘Thank you for showing me that love is the only thing that matters in this world,’ she concluded, noting that she and her late brother, as well as her half-sisters are ‘products of your heart.’

‘We are you, you are us,’ Riley wrote. ‘Thank you for trying so hard for all of us.’

Her younger sister had earlier shared similar sentiments in a poem she wrote for the occasion, which was read by her grandmother, Priscilla Presley.

The 14-year-old called her mother ‘an icon, a role model and a superhero.’

The poem read: ‘She always knew she wouldn’t be here too long… some say a broken heart killed her,’ referring to her son, Benjamin’s untimely death by suicide in July 2020.

Speaking for herself, the 77-year-old grieving mother then added: ‘Our hearts are broken. Lisa we all love you.’ 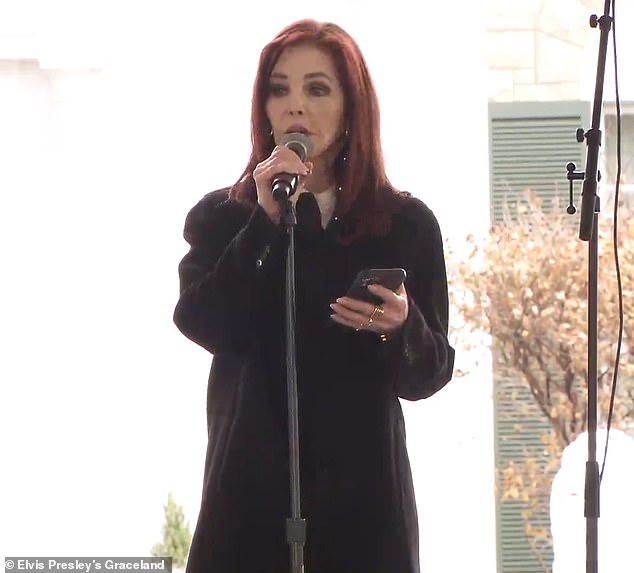 Emotional: Priscilla Presley led her family’s tributes to her late daughter at a memorial service on Sunday 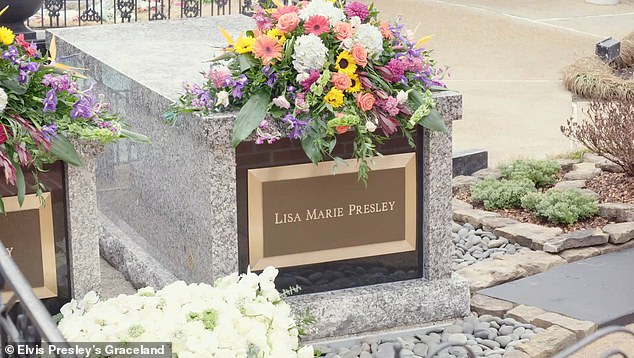 But the first eulogy of the morning was from talent agent Jerry Schilling, who described how he first met Lisa Marie Presley shortly after she was born.

‘I always called Lisa Marie ‘Memphis,” he shared. ‘She had that cadence.’

He told how Lisa Marie served as his assistance, before he started managing the singer-songwriter, and serving in her weddings.

‘Memphis, I will always love you,’ Schilling said.

Meanwhile, Duchess of York Sarah Ferguson vowed to always be around for Lisa Marie’s children, sharing how she considered the rock n’ roll princess her ‘sissy.’

The duchess shared how was with Lisa Marie her entire life, and vowed to do the same for her 14-year-old twins, as well as her older daughter, Riley.

‘We march forward in support of you.’ 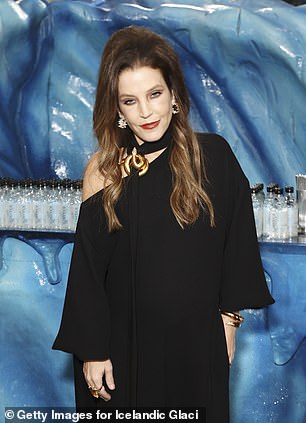 Lisa Marie Presley, 54, was last seen in public on January 10 (above) at the Golden Globes

Lisa Marie did not want the memorial service to be sad, film producer Joel Weinshanker said as the service began Sunday morning.

Former Memphis Mayor AC Wharton also shared how Lisa Marie ‘was the jewel of this city.’

Wharton added that Lisa Marie’s ‘spirit will liv in a collective memory of a city that loved her tenderly, loved her truly and loved her fully.’

Her coffin was on display to the public during the celebration of life at the family’s Graceland estate, and fans were allowed to view Lisa Marie’s headstone, where they could leave flowers or other offerings, following the ceremony.

Priscilla Presley said in a tweet Monday, ‘Thank you all for your condolences, you have touched me with your words. It has been a very difficult time but just knowing your love is out there makes a difference’

Presley — the only child of rock legend Elvis — suffered a cardiac arrest at her Calabasas home, and died at a hospital in Los Angeles on January 12.

Her mother Priscilla was by her side and the family, on being told she was brain dead, made the decision to sign a Do Not Resuscitate order.

Ahead of the ceremony, Lisa Marie’s gray marble sarcophagus sat next to her burial spot in the exact same spot as her son’s. Photos of the pair together have been placed in front of their monuments.

Benjamin’s resting place had to be moved slightly to accommodate his mother’s.

The plaque that will cover the gravesite was also covered with a tarp for protection during the service.

It drew thousands of fans to downtown Memphis, with the New York Times reporting that Graceland’s 450-room hotel was completely sold-out, and hotels near the museum and Beale Street ‘seeing an uptick in last minute reservations for the weekend.’ 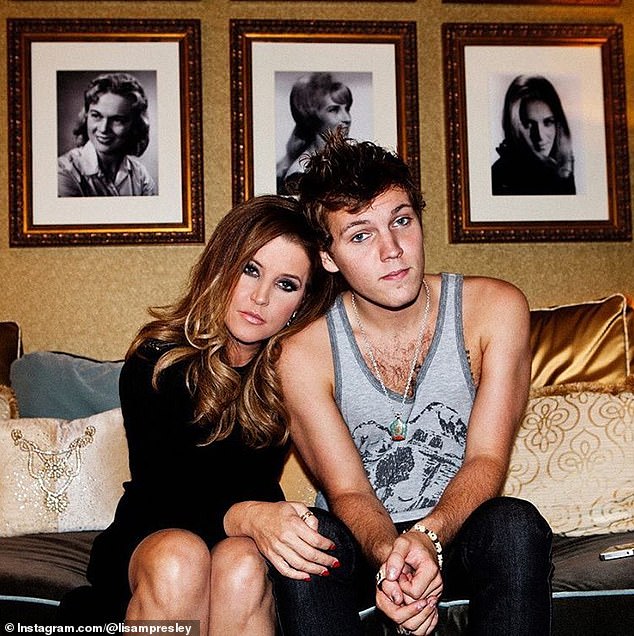 Laid to rest: Lisa Marie will be laid to rest next to Benjamin, who took his own life in 2020, in Graceland

Keough landed in Memphis for the event Saturday night, as she arrived in a private jet shortly after her grandmother Priscilla Presley and her former stepfather Michael Lockwood landed.

Lockwood was Lisa Marie’s fourth and final husband, and the father of her 14-year-old twin daughters Harper and Finley.

Keough’s father is Lisa Marie’s first husband, actor Danny Keough, who remained close to the troubled star and was living with her at the time of her death, performing CPR until paramedics arrived.

She was accompanied by her husband. It was the first time she had been seen since her mother’s sudden death.

Keough had earlier posted a touching tribute post on Instagram for her mother – the first time she’s acknowledged her death.

She posted a photo of her mother looking adoringly down at her as a small child while she gazed back with a soft smile on her face.

Presley grew up fearing her own mortality after she found her father dead at the age of nine, traumatizing her. 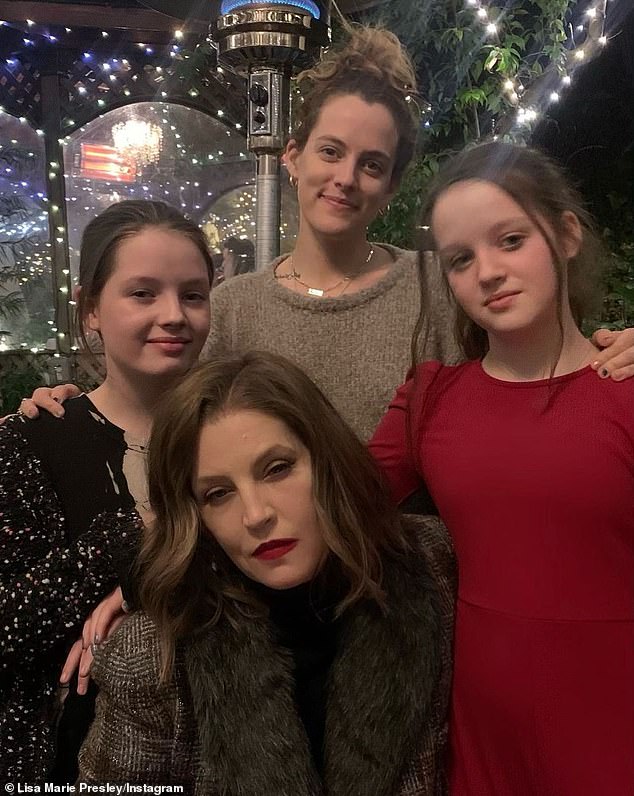 Back on August 30, Lisa revealed she makes a conscious choice every single day to stay alive for her 33-year-old daughter and 14-year-old fraternal twin daughters Harper Vivienne Ann and Finley Aaron Love (pictured in 2021)

She often spoke of her own death and even referred to the backyard at the Graceland estate as a ‘graveyard.’

‘How many people have a family grave in the backyard? How many people are reminded of their fate, of their mortality, every f**king day? All the graves are lined up and there’s a spot there, waiting for me, right next to my grandmother,’ she told Playboy in 2003.

Despite her fear, the singer believed she had many more years to live.

Last Sunday she told her friend David Kessler, who works as a grief counselor, that she had ‘so much to do.’

The pair were at the Graceland estate to celebrate what would have been Elvis’ 88th birthday.

Presley, who rarely made public appearances since her son’s death, told the adoring crowd: ‘You are the only people who can bring me out of the house.’

She added: ‘I’m not kidding. I love you back and that’s why I’m here.’

Several of the Presleys also died from heart conditions, including her own father, who died in 1977 at the age of 42 from cardiac arrhythmia with ventricular fibrillation – a condition where the heart beats abnormally and then stops.

In lieu of flowers, the Presley family is asking mourners to donate to the Elvis Presley Charitable Foundation, helping underprivileged children in Memphis. 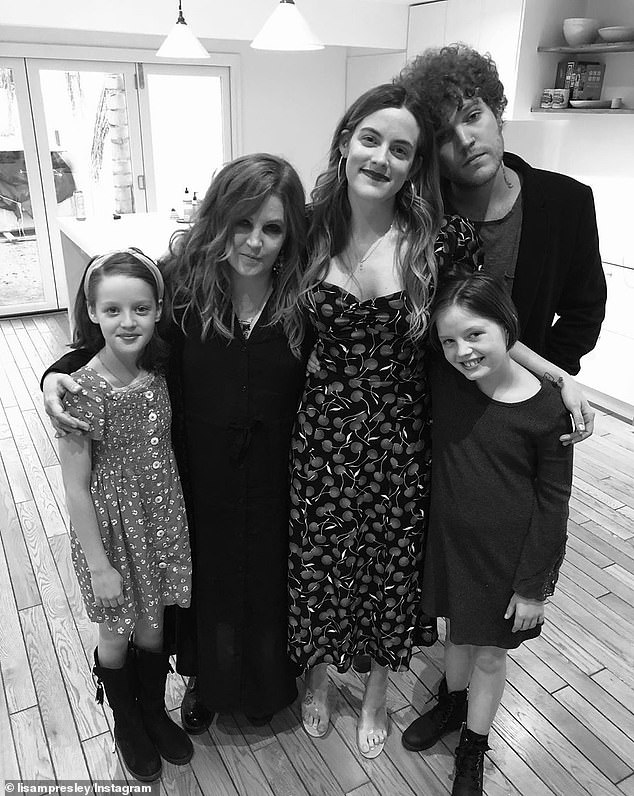 Lisa Marie is seen with her four children: twins Harper and Finley, now 14; Riley, 33; and Benjamin, who killed himself in July 2020 aged 27

TALK OF THE TOWN: No, Mr Bond, I expect you to do thighs… Daniel Craig’s 12-hour secret missions to get in shape before his 007 finale

Fun in the sun! Makeup free Natasha Oakley flaunts her trim figure in a bathing suit as she cosies up to new boyfriend Theo Chambers on a yacht in the Whitsundays

Dem Rep. Gallego: Migrants Are Being Sent Elsewhere Because Surge ‘Is a Burden’ on Small Tax Bases

Last Thing Michael Jordan Said To Me Was ‘F-ck You’

NHL: James Dolan’s use of facial recognition not a league issue